PS: Gonna need my pair in a size 14 Mr. Snowman

“We really have to do this?”

I’m standing in the mirror buttoning up my navy dot printed Ralph Lauren shirt. It’s not something that I would choose for myself, but D. Wade has been insisting on stepping up my style game and we bought this on our last shopping excursion. I had on a pair of white chinos and some white and blue low top Fendi sneakers. Between Dwyane and Eva, I don’t know if I’m a ball player or a damn fashion model.

“You don’t wanna hang out with the old gang?”

“I’m sure your friends miss you.”

“I still link up with my real friends from time to time.”

“Well, I would like to see some of my old friends.”

“I’m not stopping you from going.”

“I already sent a check for twenty-five hundred dollars to help get the football team new uniforms or whatever. Why can’t that be enough?”

I really didn’t want to go. Smiling with a bunch of fake ass people that I was never really friends with from the start.

“You know what? Don’t even worry about it. You should probably get some rest anyway. The season is starting next week, right?”

“That’s all I’m saying, babe.” I said as I took a sit on the edge of the bed. “I’m over here trying to focus on a repeat. I can’t be out here socializing with the class of ’17. We haven’t even been out of school that long.”

“I hear you, Antonio. Besides, Dante will be there so it’s not like I’ll be completely alone.” She said casually as she walked out of the room.

I sat there for a second. I didn’t know if she was trying to bait me by bringing up her ex-boyfriend or not, but I wasn’t going to stand around and find out.

“Where are my keys?”

I could hear her laughing in the living room.

“The Champ is here!” My former classmate, Eric Champion, said as I stepped up to the sign in table. The student council managed to book a space at the JW Marriott Marquis downtown.

“What’s up, Big E.” I dapped him as he came from around the table to greet us.

“I see you are here with the lovely Eva tonight. I ship this, you know?”

“Hell, yeah. You got those “Snobe” kicks for me? I saw your post on IG. Shoes are fire.”

Before I could even give him answer, I heard a man’s voice from behind us. “Eva is that you, girl?”

I looked over my shoulder to see Dante making a beeline for my girl. I moved myself closer to Eva.

“Tony, my man. I didn’t know you were going to have time from your busy schedule to come and party with the little people this weekend. Thought our girl was going to be here alone tonight.”

Our girl? The hell?

“Hey, Dante.” Eva said with a smile as she leaned in for a quick hug. “I’m glad you were able to make it.”

“I wouldn’t have missed this for the world. Thanks for hitting me up and reminding me. I’m glad this was a bye week for the team.”

She hit him up? Am I in the Twilight Zone?

“How are things out there in Kentucky?” I decided to re-join the conversation.

“Um, it’s good. You know doing my thing. Made all OVC First-Team. I’ll be on your level after this season. You can’t just go straight to the NFL. That’s a big boy sport.”

“Hey, Tony, let’s go in, man,” Eric said. I totally forgot that he was standing there. “Dre just texted. He said he located Whitney and they’re holding tables for us.”

I grabbed Eva’s hand and followed Eric inside.

All in all, it was a great night. I hate to admit it, but it was good seeing the old gang. Eric filled us in on the happenings at University of Florida, Dre is taking up computer science at FAMU, and Whitney is Pre-Law at Alabama. She already has a job lined up at her father’s law firm once she’s done with everything. I invited the guys to the home opener against Charlotte and I told Whitney to let me know when she would be back in town and I would have tickets on deck for her too.

The only damper on the evening was running into Dante and how he kept popping up all damn night. We decided to get a room at the Marriott for the night so we can hang out with the rest of the gang. Everybody wanted to hit the hotel pool, so we went to our rooms to change. The elevator ride was silent. The walk to the room was silent. After I was changed, I turned to walk out of the room when Eva grabbed my hand. She was wearing a red bikini underneath a black mesh cover up.

“I’m good. Just surprised to see your boy acting so familiar is all.”

She let out a sigh.

“I don’t even know why he said that. I did ask him if he was going, but it was kind of in passing after he sent me a DM for my birthday.”

“No. Not like that.” She picked up her phone, opened her Instagram account and held the phone out to me. I didn’t take it from her outstretched hand.

“I know you didn’t ask, but I want you to see it. It was nothing. That’s why I didn’t say anything. He just brought it up to try and get at you and it seems to be working.”

“I’m not tripping off that dude.”

My phone buzzed in my hand. It was Eric.

“Everybody’s at the pool, you ready?”

“Can we talk about this later?”

I held the door open for her and we headed out for part two of our night.
Creator of Derek Baldwin da Gawd
Top

Aw man. It's time for Snowman to catch his first case & beat some ass.
Top

We not gon sweat him at the moment. But he better tread carefully.
Creator of Derek Baldwin da Gawd
Top 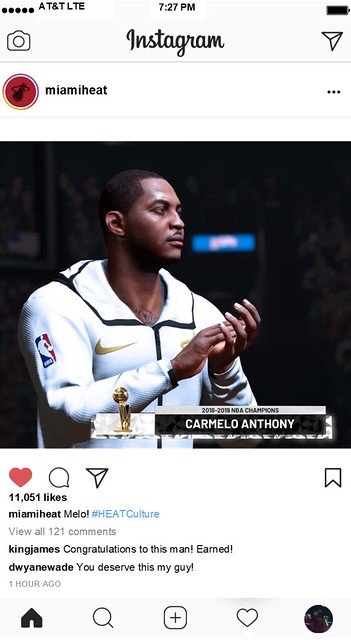 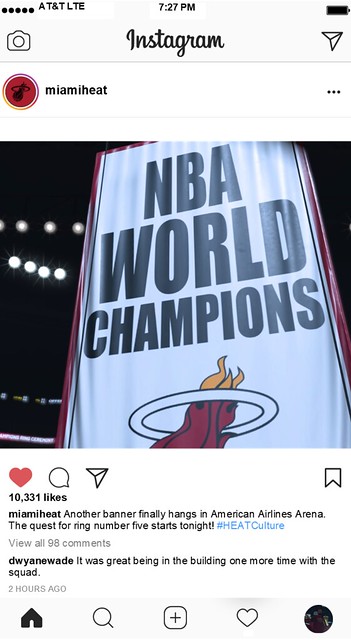 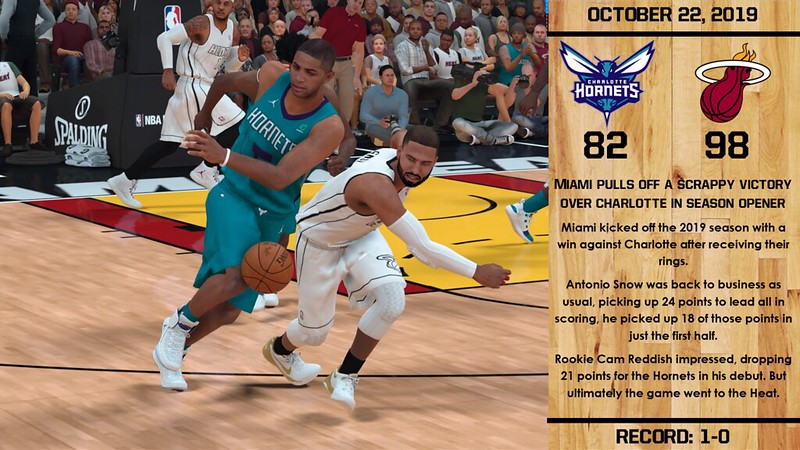 Summary: The Miami Heat kicked off their season against the Charlotte Hornets. It was a special night for two reasons, Miami received their fourth rings and Hornets rookie, Cam Reddish, made his NBA debut. Reddish led his team in scoring with 21 points. Antonio Snow went to work, picking up 18 points in the first half as the Heat powered their way to a win. Tony Parker struggled a bit tonight coming off the bench, getting worked over by Kemba Walker in this one. Parker was held to six points. Bam Adebayo owned the second half, scoring 13 points to finish with a double-double.

Erik Spoelstra on season opener: We had a few hiccups, but every thing seems to be coming together. We played a little fast, but the new guys are fitting in well.

Antonio Snow on first game back: My turnovers were out of control. I gotta tighten that up. But overall, the team played great. Looking forward to a great season. That boy Cam is the truth.

Cam Reddish on making rookie debut against the defending champs: I mean, it was definitely intimidating to think about, but I think we will adjust when we see them in Charlotte.