PHILADELPHIA -- For years, whenever the San Antonio Spurs would face the Philadelphia 76ers, Gregg Popovich would defend Brett Brown.

After spending more than a decade on Popovich's coaching staff as an assistant coach, Brown took over the Sixers in 2013 in the midst of "The Process." That meant taking his lumps for four seasons, going 75-253, while the 76ers rebuilt. San Antonio, meanwhile, remained one of the model organizations in sports and has made the playoffs in 22 straight season.

"He felt sorry for me," Brown said Friday evening with a smile.

Brown has plenty to smile about these days. His Sixers, armed with some of the game's best players, have legitimate championship aspirations.

San Antonio, on the other hand, is a mess. The Spurs arrived here for Friday night's clash with the Sixers with the NBA's 28th-ranked defense and riding a seven-game losing streak.

Brown, though, wasn't about to return the favor and defend Popovich.

"He requires no lift," he said, still smiling. "All he's got to do is look over his left shoulder and see a bunch of rings and a bunch of memories."

Popovich has more of both than any active coach and more than virtually any in the history of the sport. But after the Spurs fell 115-104 to the Sixers on Friday night to extend their losing streak to eight games, those memories seem as distant as ever and that 22-year postseason streak is in serious danger of ending.

On this night, at least, Popovich was willing to put a positive spin on things.

"Are you trying to infer this is a difficult time for us?" Popovich responded before the game with mock indignation, when a reporter relayed Brown's message about not needing to give his former boss a pep talk.

After the laughter eventually died down, the subject of San Antonio's struggles was revisited. And, this time, Popovich had a far more substantive answer.

"We're in the process [of trying things]," Popovich said. "We've changed the lineup a little bit. ... But, you know, the coach is who he is. The players are who they are. It's basketball. There's no magic play. Last year at this time, we were 8-9, and the difference in the team is, defensively, we were about the middle of the road last year. This year, we are at the bottom in a whole lot of categories.

"That's the problem. We're scoring enough points to win basketball games. But you've got to stop people, and we haven't done that very well."

For all of the talk about the Spurs having an offense stuck in the 20th century -- they are shooting more mid-range jumpers, and fewer 3-pointers, than any other team -- they still managed to enter Friday night's game with the NBA's fifth-ranked offense. But it's that vulnerable defense that has erased any chance the Spurs have had to be competitive.

To make matters worse, they've been getting lit up against one of the league's easiest schedules. Ten of San Antonio's 16 opponents have had under-.500 records, including four of the eight teams that have beaten the Spurs during this losing streak. Only the Mavericks have started with an easier schedule among Western Conference teams, according to ESPN's BPI.

The Spurs also can't blame injuries for their early-season woes. In fact, San Antonio has been the healthiest team in the league, according to Spotrac data, losing only two games to injury thus far.

So if the Spurs are having this much trouble while healthy and playing against one of the league's easiest schedules ... what will happen when that inevitably changes?

"It's not one thing," LaMarcus Aldridge said. "I can't pinpoint a certain thing, movement, whatever. It's just a unit, you know? We have to figure it out together. It's about all five guys on the floor. We try to be better, try to figure it out, and we haven't." 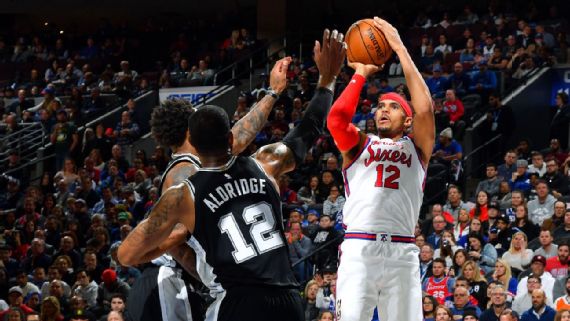 At the root of San Antonio's problems is a complicated roster construction that makes it difficult to balance things out. DeMar DeRozan -- never a strong defender, even on his best day -- is being played out of position at small forward.

DeRozan, Aldridge and Dejounte Murray are all non-threats from 3-point range; DeRozan, in particular, has simply stopped taking them, attempting only four all season and not making one at all since Dec. 26 last season. That has forced San Antonio to start Bryn Forbes, an undersized two-guard, and Trey Lyles, a shooting power forward, to provide at least some modicum of spacing.

It has also contributed significantly to San Antonio's ugly defensive numbers. That quintet has played 148 minutes together this season -- more than twice as many minutes as any other Spurs lineup -- and has been outscored by 8.9 points per 100 possessions. Of the 14 five-man units that have played at least 100 minutes this season, it is by far the worst -- and one of only two that has been outscored by its opponents.

"They're playing Lyles? Come on," said one scout who saw San Antonio recently. "Not in the West. Maybe you can play him and hope to get to ninth in the East or something."

Lyles didn't start for the first time Wednesday, when the Spurs lost 138-132 to the Wizards. He didn't play at all against Philadelphia Friday night.

Still, the problems go far deeper than simply one lineup change. While San Antonio has done a decent job of forcing teams to shoot where the Spurs want them to -- the Spurs have allowed the most mid-range shots in the league, while they are in the bottom half in both shots at the rim and from behind the 3-point arc -- they have allowed the worst field goal percentage at the rim, the third-worst from mid-range and the fourth-worst from 3-point range.

Meanwhile, the two best defensive guards on the team, Murray and Derrick White, have played just seven minutes together so far this season, after Murray missed all of last season with a torn ACL.

When asked why that was the case before the game, Popovich said, "It just hasn't worked out." Like many other things with the Spurs, the lack of shooting -- both for the Spurs and both of them individually -- would seem to be the likely culprit.

That is the same thing that makes sliding DeRozan to his natural position of shooting guard difficult to do. Pulling him out of the starting lineup entirely, given his stature within the league, would seem to be a non-starter, as well.

That leaves one other potential option: trying to move DeRozan in a trade. But he's owed $27.7 million this season and has a player option for the same figure next year. And the Spurs haven't made a single in-season trade in more than five years. That makes both finding a suitor and pulling off a move no sure thing.

In the meantime, there is no relief on the horizon. San Antonio won't have more than one day between games for a stretch of 34 days -- from Halloween until Dec. 3 -- so being able to devote extra practice time to a potential solution isn't an option. Saturday night's game against the lowly Knicks should present a golden opportunity to snap their losing streak. But that game is followed by four out of five against teams with winning records -- including the league-leading Los Angeles Lakers and the streaking Houston Rockets. So beating New York is almost a necessity.

"You can't make excuses," Popovich said. "I think the worm will turn to a degree. ... With Dejounte just coming back and getting used to everything, it's been a little bit of a tough situation.

Until it isn't, wins will remain hard to come by. And, if it doesn't change, what has been the most certain thing in the NBA these past couple decades -- the Spurs being a playoff team -- will become another one of those memories Popovich can look at over his left shoulder as these losses continue to pile up in front of him.
Top 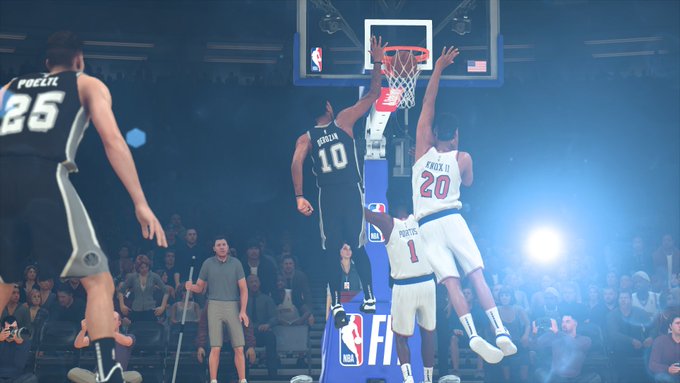 Y'all deadass losing to the Knicks now. LeBron about to brutalize you.
Top 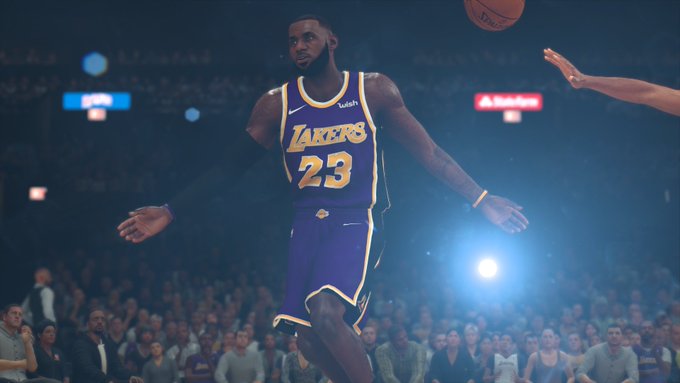 Next Game: vs. Minnesota Timberwolves (10-7)