Local and county leagues
The club was established in 1889 by Reverend E.J.H. Peach, representing the Forest Green area of Nailsworth.[3] The name Rovers was adopted in 1893, and the following year the club were founder members of the Mid-Gloucestershire League.[3] Their first home league match on 6 October was a 1–1 draw with Brimscombe, and the club went on to finish the 1894–95 season in third place.[3] Nailsworth had become an urban district in 1894 and there was an effort to ensure the town was represented by a football team. As a result, the club was renamed Nailsworth Association Football Club and many members of the original team were replaced by players from Nailsworth, although they continued to play at the original Lawn Ground in Forest Green.[3] However, the club withdrew from the league during the 1896–97 season.[3]

In 1911 Forest Green merged with Nailsworth to form Nailsworth & Forest Green United, continuing to play at the Lawn Ground and in the Stroud & District League; the new club won the league, losing only one match all season.[3] They entered a team into the Dursley & District League in 1912–13, but withdrew from the Stroud & District League after only four matches.[3] After World War I the club rejoined the league and the 1919–20 season saw them finish joint top of the table with Chalford and Stonehouse. The league subsequently held a draw to decide the championship, with Forest Green drawn against Stonehouse in a semi-final, with the winner to play Chalford for the title. However, Stonehouse beat Forest Green 3–2 in the semi-final match.[3] In 1920 the club also entered a team into the North Gloucestershire League and went on to win both leagues, as well as the Northern Junior Cup.[3] They repeated the double league championship the following season.[3] They were founder members of the Gloucestershire Northern Senior League in 1922,[4] but left the league at the end of the 1922–23 season to return to the Stroud & District League.

Regional leagues
Forest Green's first season in the Hellenic League Premier Division saw them finish fourth. Although they then spent two seasons in lower mid-table, a third-place finish in 1978–79 was the start of a successful four years, culminating in the 1981–82 season, in which they won the Hellenic League and reached the final of the FA Vase.[6] At Wembley they defeated Rainworth Miners Welfare 3–0 to win the trophy. At the end of the season the club were promoted to the Midland Division of the Southern League. Although they finished third in their first season in the new league, the next six seasons were spent in mid-table.

In 1989, the club was renamed Stroud Football Club.[7] Another season in mid-table was followed by two in which they finished in the bottom five.[7] After reverting to their original name, the club continued to struggle in the league until they were transferred to the Southern Division in 1995.[6] After finishing eighth under Frank Gregan in 1995–96, they won the division the following season, earning promotion to the Premier Division of the Southern League. The 1997–98 season saw them win the Southern League Premier Division, securing a second successive promotion and entry to the Football Conference.[6]

Conference and Football League
In Forest Green's first season in the Conference they finished twelfth, as well as reaching the final of the FA Trophy, becoming the first team to play in the final of both the FA Vase and the FA Trophy.[8] However, they lost 1–0 to Kingstonian. The following season saw another first as the club reached the first round of the FA Cup for the first time; after beating Guiseley 6–0 in the first round, they lost 3–0 at home to Torquay United in the second.[6] In November 2000 Gregan was replaced as manager by former England international Nigel Spink; the club reached the FA Trophy final again at the end of the season, losing 1–0 to Canvey Island.

In 2004–05 Forest Green finished in the relegation zone, but were reprieved after Northwich Victoria were demoted due to issues with their stadium.[9] In 2007–08 the club defeated Football League opposition in the FA Cup for the first time, beating Rotherham United 3–0 in a first round replay, before losing 3–2 at Swindon Town. The following season saw them reach the third round of the Cup for the first time, beating Team Bath and then Rochdale to set a third round tie at home to Derby County which they lost 4–3 in front of a record crowd of 4,836.[1] Another third round appearance in 2009–10 ended with a 2–1 defeat at Notts County.[6]

The 2009–10 season saw Forest Green finish in the relegation zone, but another reprieve from relegation was won when Salisbury City were expelled for breaking financial rules.[10] The club was then taken over by Ecotricity owner Dale Vince; Vince set out plans to make the club more eco-friendly, including removing red meat from players' diets, stopping selling meat products in the ground and treating the pitch with organic fertiliser.[11][12]

Forest Green finished fifth in the Conference in 2014–15, qualifying for the promotion play-offs; they went on to lose 3–0 on aggregate to Bristol Rovers in the semi-finals. The following season saw them finish as runners-up in the renamed National League, their highest-ever league position; in the subsequent play-offs they defeated Dover Athletic 2–1 in the semi-finals, before losing 3–1 to Grimsby Town in the final at Wembley.[6] A third consecutive play-off campaign was secured with a third-place finish in 2016–17. After beating Dagenham & Redbridge 3–1 in the semi-finals, the club defeated Tranmere Rovers by the same scoreline in the final at Wembley, earning promotion to League Two. This made Nailsworth the smallest town ever to host a Football League club.[12]

In 2018 Forest Green Rovers became the first football club in the world to be certified carbon neutral under the United Nations Framework Convention on Climate Change (UNFCCC) initiative Climate Neutral Now.[13] The 2018–19 season saw them finish fifth in League Two. They went on to lose 2–1 to Tranmere in the play-off semi-finals.
Top 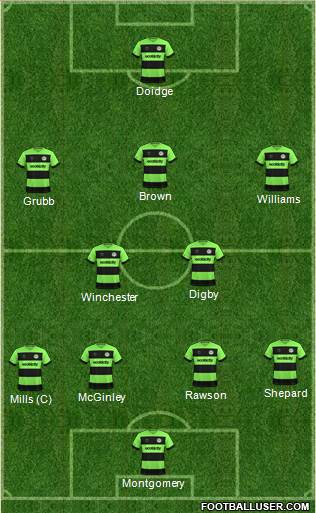 Forest Green Waste Chances, Forced to Settle for another Draw

Not an ideal start at the moment. Hopefully you can settle into a groove.
Top

Yeah need to start winning some matches for sure.
Top

Forest Green Strike at the Last Minute for First Win

Stringing together some good results there.
Top